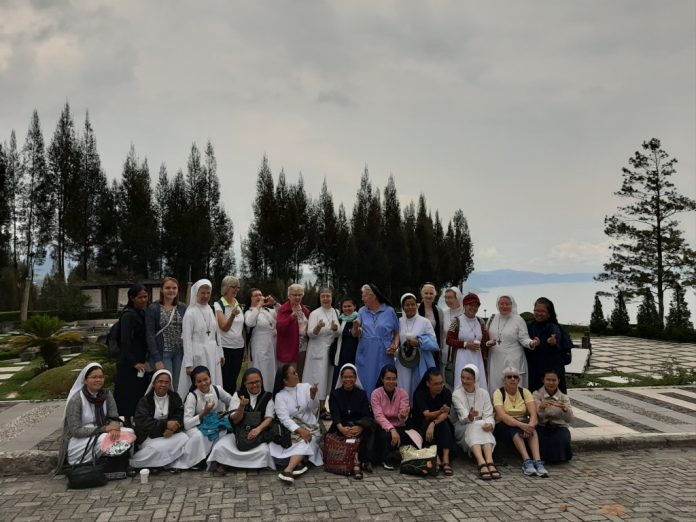 Preceding to the Congregation Plenary Council meeting which would be held in the Indonesian FCJM Province – Pematangsiantar- on September, 2-6, 2019, the meeting participants and facilitators spent some time to go on anexcursion. On August 30, 2019, they made a short visitto Taman Simalem, Berastagi.

Around 8 a.m., the group stepped on the Sentosa Bus that had been arrange to pick them up on the yard of “Monteluco” community. As they entered the bus, joy and excitement were seen on their faces. Some of them hung their purses around their right arms. Meanwhile, the other arms clutched sweaters, hats and other necessities. Some participants had prepared some snacks, drinks and other supplies to be taken along.

The journey from Pematangsiantar to Simalem Park takes around 3 hours. However, the trip was fun and enjoyable since it was filled with on-boardentertainment that brought laughter andjoy to everyone. Sr. Evifania Sinaga from the Province of Indonesia was appointed as the tour guide during this excursion. She was so creative. On the bus, the Sisters raised their melodious voices and sung beautiful Church hymns, popular songs as well as some traditional songs. Sisters from each country sang songs in their own language alternately, starting from Indonesia, Germany, Romania, the Netherlands, Brazil, and last but not least, Timor Leste. Not only did this multilingual singing bring joy to the Sisters,it also strengthened the sisterhood of the Sisters who had come from various countries. It makes us feel our oneness and strengthensour relationships.

The Tea Plantation in Sidamanik
On the way to their destination, the group stopped for a whileat the tea plantationinSidamanik. The plantation is known as Bah Butong. This is one of the most extensive and beautiful tourist destinations in Simalungun Regency. This plantation hasexisted since the colonial days in 1926. Today, it is the second largest tea plantation in Indonesia, owned and managed by PTPN IV Bah Butong and Tobasari corporations. According to some writings, this particular plantation produces the best tea which has been internationally recognized due to the fine quality of its hand-picked leaves.

While they were in the area, they could feel the gentle breeze. That is why this place is highly popular amongtourists; it is popular among diverse groups of people and families. For leisure purposes,visitors were provided with baskets and hats to make a beautiful photo. They were very excited as they put them on, making them look just like farmers harvesting the tea leaves. The vast number of tea plantsare neatly arranged and such view gives a very calming and peaceful atmosphere.

Simalem Park
The iconic scenery of Lake Toba is truly endless. With a different charm emanating from every angle, Simalem Park – which is situated in the village of Merek, Tanah Karo Regency – is one of the scenic view points that overlook Lake Toba. This place was deliberately chosen because it is one of the most popular destinations that offer relaxing activities. There, visitors could enjoy the magnificent view of Lake Toba, as well as the beautiful surrounding that is composed of flower gardens, fruit farms and a wonderful pine forest with its rich ecosystem.

At the entrance to Simalem Park, a beautiful and lushgreen landscape welcome every visitor. The entrance path is lined by cinnamon trees which are combined by pine forests on both sides. Not too far from the gate, there is a fountain that serves as a point of divergence from the entrance to the various parts of the resort. The resort offers alternative activities for its visitors, surrounded by stunning outlooks of Lake Toba.

The group seemed to enjoy the fresh and beautiful atmosphere as they walked toward the agromart(selling organic produce) and the coffee shop.Each one had a taste of the organic tea and coffee that are cultivated inSimalem. After tasting the different types of tea and coffee, they ordered some drinks which suit their personal preference. Everyone seemed to be fascinated bythe scenery aroundSimalem Park.

Orange Picking in Berastagi As If It Was Your Own Garden
To complete the excursion, the groupmade a brief stop in Berastagi to enjoy some oranges. The orchards are owned by local orange growers and whoever comes to visit are allowed to picksome oranges. Everyonefelt the sensation of harvesting oranges, as if it was your own orchard. They really enjoyed the fruits;they were sweet and refreshing. While filling up several plastic bagswith oranges, which had to be weighed and paid for afterwards, they tasted somesome right away. The activity was fun and enjoyable. Even though timewas moving fast intothe afternoon, no one indicated any sign of exhaustion nor boredom.

Epilogue
The day was well spent. Going on such excursion is a simple remedy which could be very helpful to release fatigue and draw new energy. It is also a good way to acceptthe differences among the group members, since they come from various countries, and allowing them to develop a familiarity with one another. Facts have shown that recreation revivesone’s physical and mental wellness as it can be relaxing and refreshing.The fact that Sidamanik and SimalemPark have left a lasting impression on the group membersshows that a short vacation and excursion are needed to release one’s fatigue and receive newinspiration. Holiday is a fundamental need that must be met, because it offers a lot of things which can be useful and meaningful for each of us. 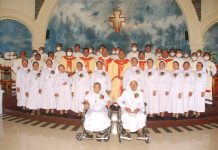 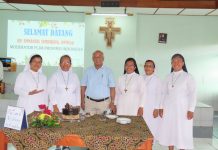